Once a remote and politically sensitive border region, the Dong Van Karst Plateau Geopark in Vietnam is now welcoming travelers with some of the country’s most stunning landscapes and a host of new homestays

“Not so long ago, you would have been shot just for standing there.” This rather chilling statement comes from my friend and guide Minh, as we gaze at the receding mountain ridges that look straight out of a Chinese ink wash painting. We are standing at the top of Lung Cu Tower, situated at the extreme north of Vietnam. “Until 1990, the Chinese fought with the Vietnamese over the position of the border, and for years after the war, foreigners were not allowed into these sensitive areas,” he goes on to explain.

An aerial view of the Dong Van Karst Plateau Geopark

Lung Cu Tower is one of many attractions that are ensconced in the UNESCO-listed Dong Van Karst Plateau Geopark, which covers approximately 2,350km2 of Ha Giang, a remote province around six hours north of Hanoi. With its dramatic karst landscapes, the park is geologically similar to Ha Long Bay; yet, while Vietnam’s most famous tourist spot is chock-a-block with tourists, the park still remains refreshingly unspoiled – even in spite of its turbulent history.

This northern region was once a simmering frontline for the border conflict between China and Vietnam during and after the 1979 Sino-Vietnamese War. This brief but bloody conflict, which led to the loss of tens of thousands of lives, saw both sides claiming victory and resulted in long-running tension along the border until the 1990s. However, with that tension now ebbing, the region is slowly but surely becoming an attraction in its own right. Recently, roads have been upgraded with UNESCO funding, making it easier to traverse the park; information boards that describe its striking features have also been erected. Additionally, an increasing number of rustic homestays have begun to open their doors. They now offer the chance for adventurous travellers to learn about the different ethnic tribes who live in and around the geopark, such as the White Hmong, the Red Dao, the Tay and the Giay.

My adventure began the day before in grubby and bustling Ha Giang, the provincial capital when I dropped in to see an old friend, James Anh, and his partner, Minh, who run a tour company. Minh, an affable and savvy character, invited me along on an inspection tour of new homestays that he and James intended to feature in their upcoming itineraries.

Since many potential customers prefer to stay with local families rather than in impersonal hotels, Minh hoped to steal a march on other tour operators by sussing out the new wave of homestay owners in the region and making sure that they could provide suitable accommodation options. I jumped at the chance to travel through this storied landscape in the company of a knowledgeable local.

The dramatic winding roads of the geopark

About 20km north of town, Minh and I started climbing into the hills in our hardy four-wheel drive. Eventually, we reached Quan Ba Pass, also known as “Heaven’s Gate”. Here, a short stairway led up to a pavilion and the first astounding vista of our journey.

Spread below us on the valley floor were the small town of Tam Son and an intricate patchwork of fields, while stretching into the distance were limestone outcrops of all shapes and sizes. Two softly rounded hills, aptly named “Fairy Bosom”, stood side by side; a signboard revealed that unlike most porous karst limestone, which is prone to erratic formations, these hills are made up of strongly crushed limestone, giving them their distinctive appearance.

After making the descent through Tam Son, we branched south off from Highway 4C to visit a couple of remote homestays. The diversion also gave us the chance to stop at a hemp-weaving collective in a village called Hop Tien, where girls and women fashion flax cloth into cushion covers and bags that sport intricate designs inspired by local customs and beliefs.

In Du Gia, we paused at a simple roadside restaurant to enjoy a welcome lunch of spring rolls, morning glory and pork fried with garlic, before making our way to Du Gia Homestay. Set in a solid wooden house on stilts among emerald green rice fields, the homestay looked like an idyllic spot to rest up. However, we still had a long way to travel, so we set off again towards the town of Yen Minh.

For centuries, this difficult terrain has been inhabited by various ethnic minorities, whose lives are clearly tough. Along the way, we passed locals carrying huge bundles of firewood or dried corn plants. Minh explained that corn is one of the few crops that grow in this harsh landscape, and that people use it not only for feeding themselves and their animals, but also for brewing a potent corn wine. Nothing goes to waste; even the husks and stems are used as fuel.

We soon discovered just how powerful the corn wine was at our next homestay in Ma Le. During dinner, our youthful host Dzung kept topping up our cups in an effusive display of hospitality. “Chúc súc khoe!” he exclaimed with a grin, wishing us good health as we clinked our glasses and downed yet another shot of what he called “happy water”.

A local man shoulders an enormous bundle of firewood

Dzung is a kinh (ethnic Vietnamese) who is teaching a local Giay family how to run Ma Le Homestay as a way of supplementing their farming income. “These homestays are a great idea,” he mused. “Most travellers are curious about the Vietnamese way of life, and the locals are glad for the extra money.”

At Lung Cu Tower the next morning, where Minh is recounting the region’s violent history, it’s hard to believe we are talking about the same place. With his words weighing on our minds, we make our way to the Sunday market in Dong Van, where locals from outlying villages congregate every week, dressed in their best. Our moods are lifted by the vivid scenes: buffaloes, pigs, chickens, corn wine and bolts of cloth are being traded at every turn. The satins and sequins of the traditional outfits we see clearly demonstrate the diversity of people that call this region home. 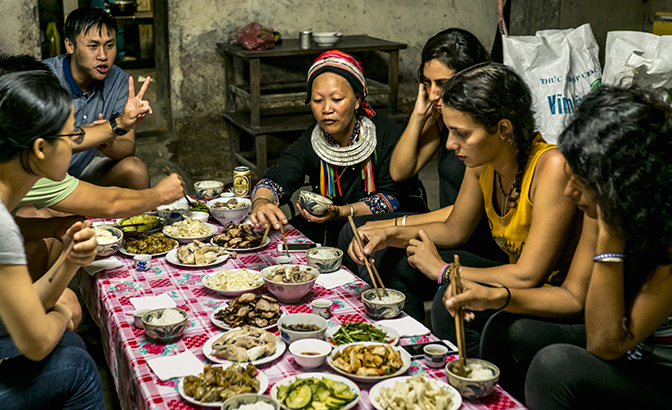 Just a dozen kilometers from Dong Van, on our way to the district of Meo Vac, we find ourselves navigating the Ma Pi Leng Pass. The road snakes around the face of a sheer cliff; below, the Nho Que River slides through a dramatic canyon. Minh grins when he sees the slack-jawed expression on my face. While the park might be a geologist’s idea of heaven, its magical landscapes have the power to inspire sheer awe in the layman, too – and I am utterly spellbound. 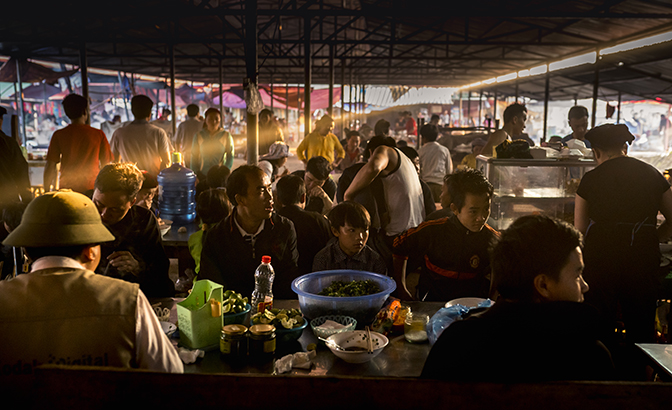 The hustle and bustle of the Sunday market in Dong Van

The Dong Van Karst Plateau Geopark provides evidence of major tectonic events that date back to the Cambrian Period around 500 million years ago. The porous nature of karst limestone, combined with thousands of years of erosion by wind and water, is responsible for many of the area’s striking features, which include steep canyons, underground rivers, vast caves and “rock gardens”, where boulders standing in fields appear to assume the forms of animals. Thousands of fossils have been found here, including previously unknown species.

Regular buses connect Hanoi with Ha Giang, covering the 300km in six to seven hours. Local buses travel between Ha Giang and Dong Van, but it’s easier to rent your own transport to explore the park. Try renting a 4×4 or a bike at Cuong’s Motorbike Adventure in Hanoi or Vision Travel in Ha Giang.

Please check the establishments’ respective websites for opening hours as well as booking and seating requirements before visiting, and remember to adhere to safe-distancing measures while out and about.

This 7-day North Vietnam Tours is specially customized for individuals, small group tours and family holidays, those are looking for an off the beaten track tour itineraries in the northern Vietnam.

The ripening rice season in Vietnam, give the many places picturesque scenes, it's the best time for travelers who want to see the rice paddy fields.

7-day by vehicle Ha Giang – Cao Bang, Northern Vietnam Adventure (Home stay, Trekking, Market)
Check In
09
May
2020
Adult: 3
Check Out
09
May
2020
Children: 0
BOOKING SUCCESS
Booking Tour Successfully!
We have well received your booking. We are processing your booking and will get back to you within 24 hours.
After successfully checking your booking, a payment notification will be sent to your registered email, please check your email regularly to complete the payment to ensure your booking.
Success
Your message was successfully sent. We will contact you shortly